The design process can be described in many ways. And the way that a designer gets from A to B can be traced along many routes. This we can read about with John Chris Jones or Kees Dorst and we can imagine what goes on under the bonnet with Nigel Cross or Bryan Lawson.

If we want to think about how a politician gets from A to B, and this is part of the gist of my work, there’s no shortage of speeches, interviews and media reports in the archived debate where that route is described either directly or through whichever commentator is on hand to help out.

This weekend the Stop HS2 campaign republished one of their commentaries on a 2012 BBC radio interview with the then Secretary of State for Transport, Justine Greening. During her interview she revisits one of the themes of my ongoing wrestle with both the design process in general and the HS2 process in particular.

Like many of her peers (enobled and otherwise), Greening invokes the memory of the Victorians as a part of the rhetoric used to justify the building of the high speed railway line.  There are numerous examples of this precedent being drawn into the debate from Lord Adonis, one of the early proponents of the HS2 project, to Steve Bell, the Guardian newspaper’s award winning and prolific political cartoonists although the latter example (below) is used as part of the cartoonist’s visual rhetoric on the general political situation rather than a specific engagement with the development of infrastructure. 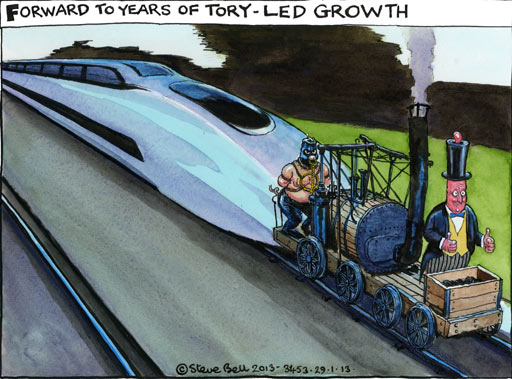 The more specific references, in the context of the HS2 development, tend towards two positions.

The first is about the money. We [the current Government] are making the biggest investment in the railway network since the Victorians. This is quite a contentious statement since it opens up the Government to criticism about the nature of Victorian investment (private rather than public) as well as more pedantic questions about how much the Victorians invested and how we know. This position, despite having been questioned in the House of Commons and being shown to be somewhat spurious (HoC, 18 July 2013 : Column 940W), remains in the Ministerial vocabulary (Minister’s speech to East Midlands Chambers of Commerce, 28 March 2014). This position looks more like a playground boast about what how you spent your pocket money on your holidays than how you got to the coast in the first place.

The second position, Victorians as worthy of emulation,  is potentially more relevant to the design journey and this is the one referred to above by the Stop HS2 commentator. The original interview has long since dropped off of the BBC iplayer schedule and is no longer available online, therefore I’m obliged to refer to the StopHS2 commentary which I quote here:

Her invocation of the Victorian vision can also be found across the debate and is more akin to a designer’s way of talking. She talks about at how things have been done in the past, draws on them as a positive example to be emulated and at the same time uses it to justify how things are to be done in the present.

From a general design perspective this looks a little like a framing mechanism and a lot like a reference to guiding principles. These principles, and particularly those relating to the design and technology of the railway, are unsurprisingly taken up by the Stop HS2 commentary.